In a research note published today, MLV analyst George Zavoico maintained a Buy rating on Compugen (NASDAQ:CGEN) with a $14 price target, following the company’s announcement that a second milestone was achieved for one of two undisclosed immune checkpoint regulators in its cancer immunotherapy collaboration with Bayer HealthCare.

Zavoico wrote, “The undisclosed milestone triggered a $6.0 million payment to Compugen out of the $30.0 million in potential preclinical research milestone payments for the two programs. This follows the partnership’s first milestone of $1.2 million in July 2014. In our view, the achievement of a second prespecified milestone within a 6-month time period signals steady progress in the development of antibodies targeting the immune checkpoint regulators licensed to Bayer, and points towards more milestone payments in due course.”

The analyst continued, “Inthespaceofonlyafewmonths,Compugenhascollected $7.2 million for one of two licensed immune checkpoint regulators and, upon successful completion of preclinical studies, will earn a total of $15 million in milestones. We project commencement of clinical trials about a year from now, which will trigger the first of what could amount to a total of $500 million in clinical milestone payments. While Bayer and Compugen are jointly pursuing a preclinical research program for the two candidates, Bayer will have full control over further development, with worldwide commercialization rights to these potential cancer therapeutics. Compugen could receive high single digit royalties on any revenues that result from marketed products.” Zavoico added, “Compugen recently attracted attention by disclosing validation data on several of their immune checkpoint targets and by initiating therapeutic antibody development of its own drug candidates, identified through the in-house discovery platform. As two of Compugen’s eleven novel immune checkpoint regulator targets are already licensed to Bayer, we expect further progress in the development of other regulators that may provide clinical benefit in cancer and autoimmune diseases to drive continued partnering interest.”

According to TipRanks.com, which measures analysts’ and bloggers’ success rate based on how their calls perform, analyst George Zavoico has a total average return of 2% and a 33.3% success rate. Zavoico is ranked #1609 out of 3352 analysts. 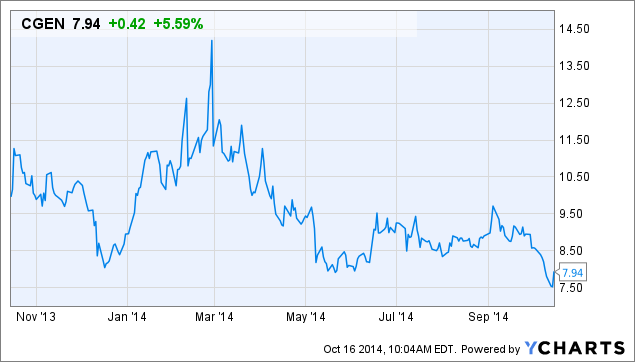