MLV Initiates Buy On Xencor, Sees 46% Upside For The Stock

In a research report released today, MLV analyst Arlinda Lee initiated coverage on shares of Xencor (NASDAQ:XNCR) with a Buy rating and a $15 price target, which represents a potential upside of 46% from where the stock is currently trading.

Lee wrote, “Xencor’s proprietary XmAb platform has generated 7 therapeutic antibodies in clinical testing. While difficult to quantify, we think the platform’s role in generating new drugs is critical to XNCR’s continued growth. We ascribe the XmAb platform $6/share value based on 7 announced partnerships. We note additional partnerships or pipeline developments would represent upside to our model. Additionally, we estimate wholly owned Phase 1a anti-IgE antibody XmAb7195 for asthma and other inflammatory diseases is worth $8/share based on our probability-adjusted DCF. With multiple data points for multiple products over the next 12-18 months, XNCR has a well-balanced mix of near-, mid-, and long-term value drivers, but we believe its longer-term value is underappreciated.”

The analyst continued, “Arguably, XNCR’s most attractive asset is the XmAb platform that enables expansion of XNCR’s own proprietary pipeline and/or additional therapeutic candidates for partners. The ability to engineer antibody function has resulted in seven partnerships and seven antibodies in the clinic. Thus, we view the XmAb platform as validated, although its current valuation may not fully reflect its worth.” The analyst added, “XmAb7195 binds IgE in the blood, clearing it and preventing it from activating inflammatory cells. Unlike first generation anti-IgE Xolair, it also inhibits the activation of IgE producing B cells. In animal models, XmAb7195 has shown more effective suppression of circulating IgE than Xolair. We think XmAb7195 can generate peak US sales of $1.5B in 2030 in inadequately controlled moderate- severe adult asthma patients. Though we note XmAb7195’s potential in additional immune indications like pediatric asthma, urticaria (hives), and allergic rhinitis, we do not currently include them in our model.” 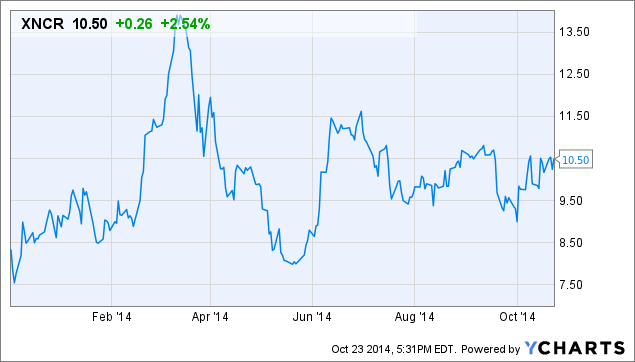