In a research note issued today, MLV analyst Carter Driscoll initiated coverage on Quantum Fuel System Technologies (NASDAQ:QTWW) with a Buy rating an a price target of $5.50, which represents a 43% upside from where the stock is currently trading.

Driscoll wrote, “QTWW is repositioning itself as an alternate fuel systems solutions provider, away from primarily offering CNG storage tanks. QTWW supplies fuel system solutions to the light-duty (LD), medium-duty (MD) and heavy-duty (HD) truck markets with a focus on CNG as the fuel. The company made a strategic decision to move into direct competition with its largest customer – Agility Fuel Systems – so it would not get pigeonholed as just a CNG storage tank provider. While we expect this transition to take 3-4 quarters to implement (company started in earnest in May 2014) we believe their long history designing proprietary, alternative fuel technologies positions them to be successful. Many fleet operators and transportation companies are beginning to embrace the displacement of diesel with natural gas for economic reasons and better emission profiles, creating a multi- billion market opportunity for conversions and OEM solutions.”

The analyst continued, “QTWW has only targeted the HD truck OEM segment with its own fuel storage system solutions since May 2014 but has already won some significant orders including customers such as Ryder (R-Not Rated), Kwik-Fill and Dillon Transport. While the majority of the truck opportunity is conversions of existing diesel trucks today, we expect the OEM installations to become a much larger portion of QTWW’s revenue growth over the next few years.” 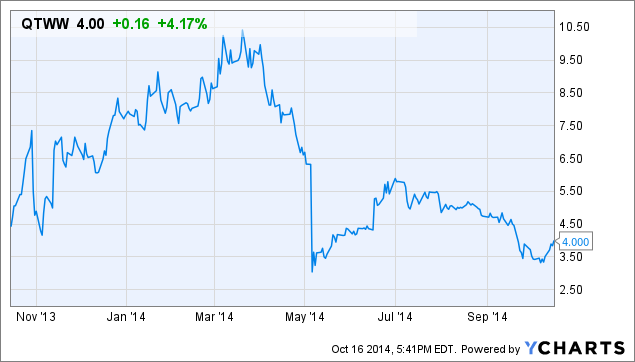