In a research report issued today, MLV analyst Vernon Bernardino reiterated a Buy rating on RedHill Biopharma (NASDAQ:RDHL) but slightly reduced his price target to $25 (from $27), which implies an upside of 209% from current levels.

Bernardino noted, “We believe RedHill Biopharma is achieving pipeline and operational progress as expected, and thus, view the stock’s 45% pullback from the highs in September unwarranted and unrelated to any issue in the company’s fundamentals. The company recently submitted its Marketing Authorization Application (MAA) seeking Rizaport (RHB-103) approval in the EU, initiated its third Ph 3 program (RHB-102 for gastroenteritis), and gained Qualified Infectious Disease Product (QIDP) designation for RHB-105.

The analyst concluded, “RedHill remains on track to gain approval and generate meaningful revenues from other products in the 2015-2017 timeframe. We look for multiple milestones, such as assignment of a new PDUFA decision date for Rizaport, initiation of Ph 3 with RHB-104 in Crohn’s in the EU in 4Q14, and topline data from the ongoing Ph 3 with RHB-105 in Helicobacter pylori in 1H15, as catalysts for stock appreciation.”

According to TipRanks.com, which measures analysts’ and bloggers’ success rate based on how their calls perform, analyst Vernon Bernardino has a total average return of 17.1% and a 11.1% success rate. Bernardino is ranked #775 out of 3377 analysts. 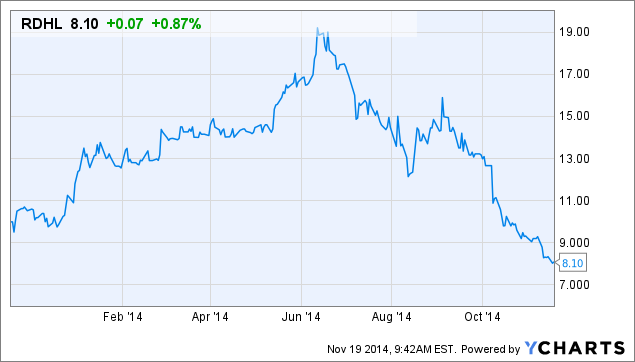