MLV analyst Carter Driscoll weighed in today with his thoughts on Tesla Motors (NASDAQ:TSLA), after the company’s CEO Elon Musk made several statements this week at the Detroit Auto Show, two of which caused the stock to decline. The analyst rates the stock a Buy with a $300 price target, which represents a potential upside of 56% from where the stock is currently trading.

Driscoll wrote, “Musk declared that Chinese sales were very weak in 4Q. However, he said that Chinese consumers “misunderstood” the electric vehicle (EV) charging process. Part of this is an admission that TSLA is doing a poor job of educating the buying public, which it is working to rectify, and part of the answer is likely slower uptake as other auto OEMs confess to bloated Chinese inventories. We believe a return to growth in China will take at least one to two quarters. While U.S. and European demand may have offset China, we have trimmed our 4Q14-2016 estimates.”

The analyst continued, “Musk declared that TSLA would not reach sustained profitability (i.e., positive GAAP EPS) until 2020 after reaching full gigafactory production. We don’t think this statement was meant to talk down the road to profitability, but rather to highlight that TSLA’s accounting for leases on a GAAP basis (and expected higher uptake of leasing) leads to more conservative profit recognition vs. traditional auto OEMs. More noise than anything else, we also address other comments Musk made at the show.” 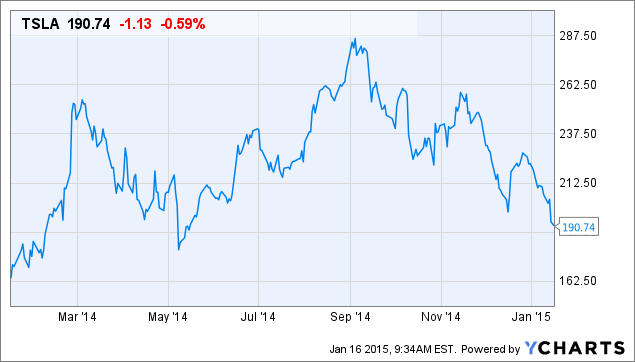