Microsoft Corporation (NASDAQ:MSFT) is set to report fourth-quarter fiscal 2015 results on Jul 21. In the last quarter, Microsoft posted quarterly earnings and sales figures that beat estimates. Let’s see how things are shaping up for this announcement.

In a research report issued today, FBR analyst Daniel Ives weighed in with his predictions on the upcoming earnings. The analyst reiterated an Outperform rating on Microsoft stock with a price target of $53, which represents a potential upside of nearly 14% from where the stock is currently trading.

Ives wrote, “While we expect a seasonally strong quarter with potential upside to Street estimates, we are lowering our FY16 revenue and pro forma EPS estimates solely to reflect the anticipated difference in Windows 10 revenue recognition. That said, we and the Street will focus more on the company’s free cash flow going forward as a valuation metric, which we estimate will not change with the transition to cloud as deferred revenue grows over the coming quarter/years.”

“We anticipate that F4Q15 was another important step in the right direction for Microsoft with continued traction for Microsoft’s core cloud products (e.g., Office 365/Azure). Overall, with Nadella making the tough but smart move, in our opinion, to “rip off the Band-Aid” in terms of the Nokia acquisition/write-down, we believe Microsoft’s laser-focus on software versus hardware with a massive product cycle in its back pocket leaves it well positioned to enter the “golden age” of cloud computing with Windows 10 front and center as a major potential catalyst.”, the analyst continued.

According to TipRanks.com, which measures analysts’ and bloggers’ success rate based on how their calls perform, analyst Daniel Ives has a total average return of 10.0% and a 68.5% success rate. Ives has a 3.5% average return when recommending MSFT, and is ranked #327 out of 3712 analysts. 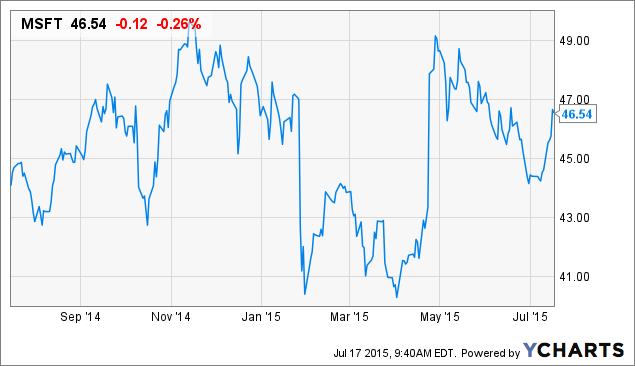