In a research report published Thursday, Roth Capital analyst Krishna Shankar reiterated a Buy rating on Micron Technology, Inc. (NASDAQ:MU) with a $40 price target, after the company announced results of operations for its second quarter of fiscal 2015, posting revenue/GAAP EPS results of $4.17 billion/$0.78 versus Shankar's $4.19 billion/$0.67 estimate. Shares of Micron closed today at $26.72, down $0.41 of 1.51%.

Shankar noted, "We continue to be positive longer-term on 2015/2016 DRAM and NAND flash pricing and demand due to industry consolidation and muted capacity additions. We view Micron's focus on higher-margin server, networking, mobile DRAM and 3-D NAND flash as a positive."

Furthermore, "We believe that NAND pricing will be stable driven by new smartphone and tablet demand, coupled with strong demand for SSD drives. Micron estimates that it may be able to outpace industry NAND bit supply growth of 35 to 40% in 2013 through rapid ramp of 20nm technology and incremental capacity additions." 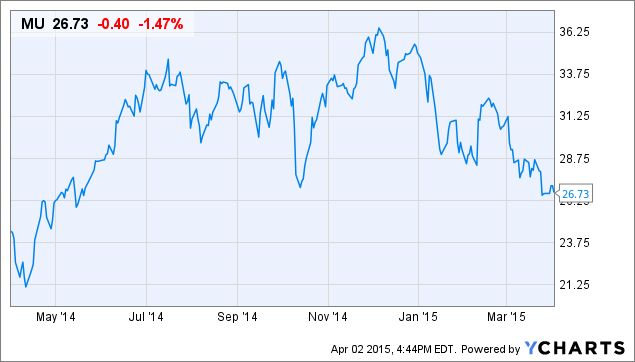