In a research report issued today, Canaccord Genuity analyst Camilo Lyon maintained a Hold rating on Michael Kors Holdings Ltd (NYSE:KORS) and reduced the price target to $63 (from $76), as the company is scheduled to release its fiscal fourth-quarter earnings results before the market open tomorrow morning. The new price target represents a slight upside potential from current levels.

Lyon wrote, “Our cautious stance on KORS has not changed as we believe retail comps continued to decelerate in FQ4. Discussions with our industry contacts coupled with store checks during the quarter suggest KORS retail stores continued to suffer from tepid traffic trends – we believe due to a combination of factors such as soft tourism trends in key NA markets and, more importantly, pervasive distribution of the brand across channels. Moreover, we believe e-commerce traffic also decelerated significantly from the 70% growth last quarter as weather issues impacted the company’s ability to fulfill/ship orders.”

The analyst continued, “Our longer-term concern remains that the company has expanded its distribution too quickly, resulting in a ubiquity of the brand, and ultimately losing the luster of its aspirational image. As such, we believe KORS’ growth algorithm will take another step function down in F2017 when door growth in NA and Europe tops out and comps are the sole driver of retail growth. By this point (F2017), we believe NA comps will have turned negative. Despite a seemingly inexpensive valuation of 13x P/E, we believe there is further downside risk to earnings and thus are reducing our PT to $63.”

According to TipRanks.com, which measures analysts’ and bloggers’ success rate based on how their calls perform, analyst Camilo Lyon has a total average return of 8.7% and a 59.3% success rate. Lyon has an 0.9% average return when recommending KORS, and is ranked #465 out of 3608 analysts. 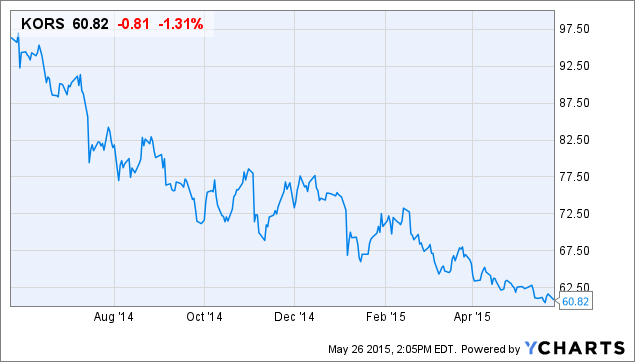