In a research report issued Thursday, Merrill Lynch analyst Tazeen Ahmad reiterated a Buy rating on shares of GW Pharmaceuticals PLC- ADR (NASDAQ:GWPH), with a price target of $153, after the cannabis-based drug maker raised $252 million through an equity offering at $90 per American Depositary Share (ADS).

Ahmad wrote, “We believe GWPH shares are attractively valued following their cash raise (and near-term dilution) as they prepare for commercialization of Epidiolex. The asset to treat rare forms of epilepsy has been significantly de-risked, in our view, after data from two phase 3 trials was statistically significant in two different types of epilepsy, Dravet and Lennox Gastaut Syndrome (DS and LGS). Now, GWPH will prepare for submission of the Epidiolex NDA in 1H17 as well as transition into a larger scale commercial pharma company to fuel long-term growth. The company expects another phase 3 trial in LGS to readout 3Q16 and on DS in 1H17 with confirmatory data on dose response. GWPH started a phase 3 trial in Tuberous Sclerosis Complex (another rare disease that results in pediatric epilepsy) and plans to initiate an Epidiolex trial in infantile spasms in 4Q16. The company will also continue to build out its cannabinoid platform with additional drugs.”

Out of the 7 analysts polled by TipRanks, 6 rate GW Pharmaceuticals plc stock a Buy, while 1 rates the stock a Sell. With a return potential of 48.2%, the stock’s consensus target price stands at $135.14. 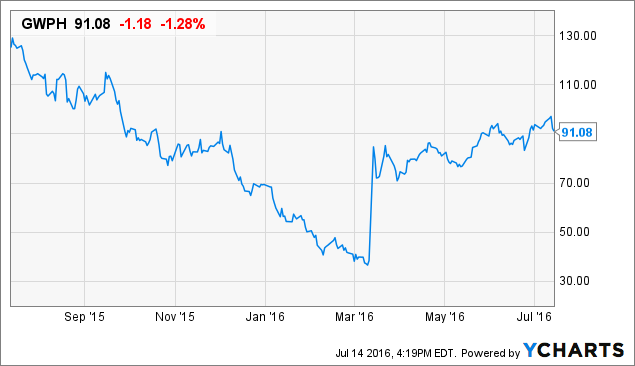