Medivation Remains One Of Our Top Ideas, Says Janney Capital

In a research report released August 8, Janney Capital analyst Kimberly Lee reiterated a Buy rating on Medivation Inc. (MDVN) with a $110 fair value estimate, on the heels of the news that MDVN upwardly revised 2014 US Xtandi revenue guidance.

Lee wrote, “Medivation beat on the top- and bottom-line and upwardly revised 2014 US Xtandi revenue guidance, citing increase in market share in the post-chemo setting and increased adoption. This improved outlook still only takes into account pre-chemo revenue post the anticipated US label expansion in 3Q. We expected an upward revision in guidance, as we believed prior guidance was very conservative considering the imminent label expansion in the pre-chemo setting which should drive significant usage amongst urologists, a currently underpenetrated market. Next up is the Sept. 18th PDUFA date for Xtandi in the pre-chemo setting and TERRAIN and triple negative breast cancer data by year-end. MDVN remains one of our top ideas, as we continue to believe Xtandi will become the drug of choice for the treatment of prostate cancer given its unprecedented efficacy and safety profile in the pre-chemo setting.”

According to TipRanks.com, which measures analysts’ and bloggers’ success rate based on how their calls perform, analyst Kimberly Lee has a total average return of 4.3% and a 51.9% success rate. Lee has a 23.4% average return when recommending MDVN, and is ranked #1271 out of 3219 analysts. 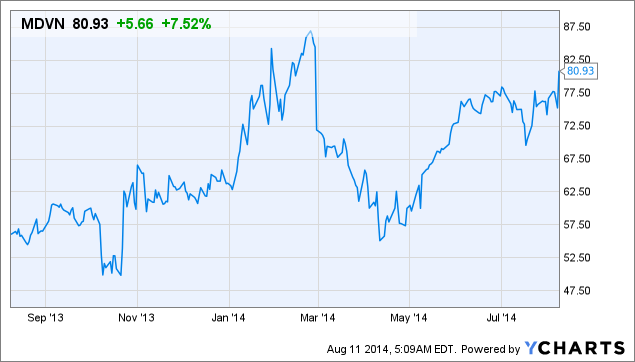