Medivation Remains One Of Our Top Ideas For 2014, Says Janney

In a research report issued today, Janney Capital analyst Kimberly Lee maintained a Buy rating on Medivation Inc. (MDVN) with a $110 price target, which represents a potential upside of 46% from where the stock is currently trading.

Lee noted, “We project 2Q Xtandi revenue of $124.5 million, which is above consensus of $122.0 million. Our EPS estimate of $0.20 is two pennies above consensus. We believe the focus of the earnings call will be on Xtandi launch metrics and an update on EU reimbursement as well as label extension studies. Feedback from physicians continues to point to Xtandi being treatment of choice in the post-chemo setting. In addition, urologists continue to indicate that label expansion will be a catalyst for these physicians to begin to prescribe Xtandi in the pre-chemo setting. Medivation remains one of our top ideas for 2014 and we continue to believe that 2014 revenue guidance of $540-$575 million is conservative and we expect an upward revision of guidance later this year following Xtandi’s potential label expansion in 3Q and by year-end in the US and EU, respectively”.

According to TipRanks.com, which measures analysts and bloggers success rate based on how their calls perform, analyst Kimberly Lee currently has a one-year average return of 12.0% and a 53% success rate. Lee has a 56.9% average return when recommending MDVN, and is ranked #970 out of 3213 analysts. 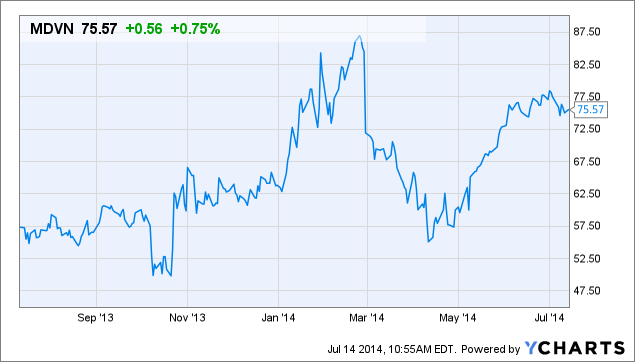