Siegner noted: “Another month of disappointing US results underscores the need for urgency behind substantive change beyond just ops/service. Results in Europe were better than expected behind U.K. strength (France & Germany flat) and not as bad as feared drag from Russia. Downside in APMEA was expected given food supplier fallout in China and Japan (-25.1%), but incremental expense and tax impact was a negative surprise that will weigh on consensus estimates. We’re lowering our 2014 EPS estimate to $5.48 from $5.61 behind higher taxes ($0.07), currency ($0.03) and headwinds from Russia margin impact (incremental store closures & supply reroute) and slightly higher than anticipated costs assoc. with the supplier matters.”

However, the analyst explained his Buy rating saying, “Our upside scenario of $125 includes i) U.S. op margins holding 2013 levels on sss closer to 3%, ii) modest other cost control efforts including G&A, and iii) a still lower than average consumer multinationals EBITDA multiple of 12x.” 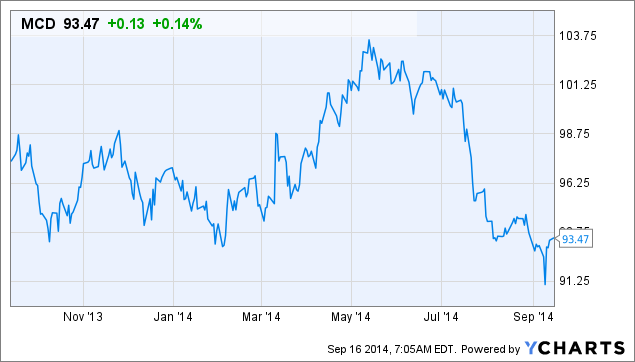