Maxim Group analyst Jason Kolbert weighed in today with a few insights on Keryx Biopharmaceuticals (NASDAQ:KERX) after the company announced that two national insurance providers have added Auryxia to their Medicare Part D formularies. Keryx shares are currently trading at $10.09, up $0.03 or 0.29%.

Kolbert noted, “The news above is positive but we balance this with our frustration around disappointing sales of Auryxia ($0.4M last qtr) which was far below our launch expectations for it to be a product with $1 billion potential. We still believe Auryxia has the clinical and cost-effectiveness benefits to make it the leader in the phosphate binder market. The question is whether the company can displace the established drugs and make Auryxia the standard of care.”

“We previously reduced our quarterly and full year estimates for Auryxia, allowing more time for the new insurance coverage to turn into sales. We also shifted our sales forecasts from 3Q15 to 4Q15, with an FY15 estimate of $32M. We continue to expect acceleration in 2016. We also increased the risk adjustment to 50%, reflecting the slow launch and execution risk.”, Kolbert added.

The analyst rates Keryx shares a Buy with a price target of $17.00, which implies an upside of 69% from current levels.

Out of the 10 analysts polled by TipRanks, 8 rate Keryx Biopharmaceuticals stock a Buy, one rates the stock a Hold and one recommends Sell. With a return potential of 108.5%, the stock’s consensus target price stands at $21. 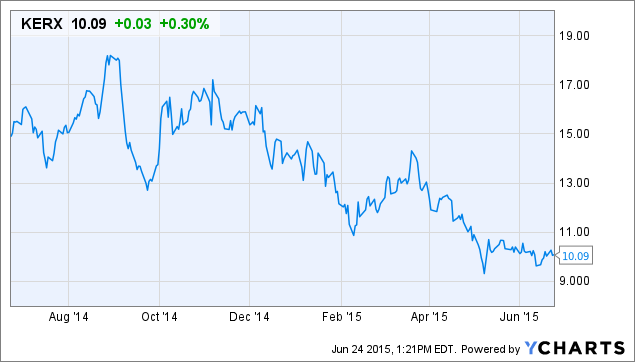