Maxim’s healthcare analyst Jason Kolbert weighed in with a few insights on Athersys, Inc. (NASDAQ:ATHX), after the company announced interim results from its exploratory Phase 2 clinical study of the intravenous administration of MultiStem(R) cell therapy to treat patients who have suffered an ischemic stroke. The market didn’t like Athersys’ results, sending shares down 36% Friday.

Kolbert noted, “Multistem appears to be able to extend the treatment window in stroke from a few hours to 36 hours. That is dramatic. As an informative PII study, we are excited because the data is clear and suggests a modestly powered pivotal trial should be able to replicate the sub-group data set that this trial produced.” Furthermore, “The risk/reward equation is highly favorable. Safety and tolerability are not an issue so the question is: What is the treatment window? We know the dose work is close and the endpoints work.”

“Bearish investors will focus on the fact that the trial did not show a p-value on the primary endpoint(s). We believe the bear’s concerns are more than reflected in Athersys’ low market valuation. The pathway forward in stroke is now clear. We expect that Athersys will pioneer forward with a global pivotal trial (US, EU and Japan). As such our valuation metrics, and subsequent price target are unchanged. In other words, hang on.”, the analyst added.

The analyst rates the stock a a Buy with a $9.00 price target, which represents a potential upside of 543% from where the stock is currently trading. 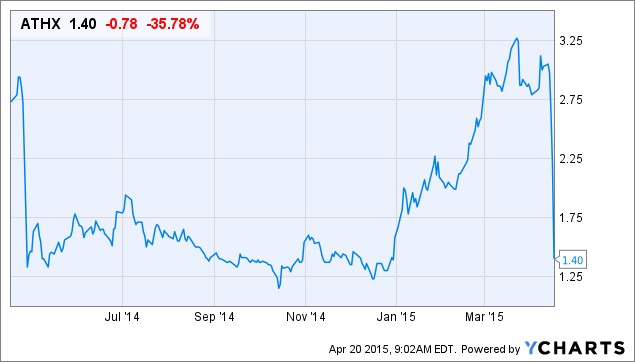