Maxim’s healthcare analyst Jason Kolbert came out with a positive commentary on TrovaGene Inc (NASDAQ:TROV), following the news that the company’s urine-based HPV HR Test is equally capable of detecting high-risk HPV when compared to traditional cervical cancer tests. The data were presented at the 30th International Human Papillomavirus Conference.

Kolbert noted, “Trovagene is brilliantly positioning themselves, in our opinion, as a go to company in the cancer immunotherapy space. The company announced the launch of a study that aims to evaluate the utility of the Company’s Precision Cancer Monitoring (PCM) technology. The goal is to be able to predict responses to therapy guided treatment.”

Furthermore, “While Trovagene is now a commercial company (the company reported its first quarter of product revenues last quarter), we see 2015 as a building year towards KOL adoption. The real revenue build begins in 2016 as Trovagene looks to penetrate larger commercial opportunities with a wider offering of tests. We see advanced technology, high sensitivity, and other attributes to the company’s platform that move it beyond just single molecule sequencing.”

The analyst rates TrovaGene shares a Buy, with a price target of $13, which implies an upside of 89% from current levels.

As of this writing, all the 5 analysts polled by TipRanks rate TrovaGene stock a Buy. With a return potential of 45%, the stock’s consensus target price stands at $10. 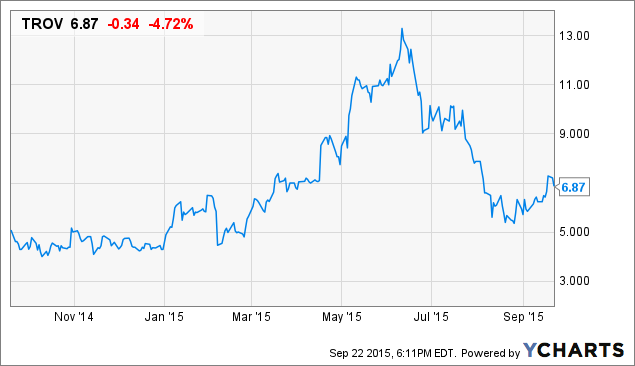