In a research report released today, Maxim analyst Jason McCarthy reiterated a Buy rating on shares of Juno Therapeutics (NASDAQ:JUNO), with a price target of $80, after the company announced that the Phase 2 ROCKET trial of JCAR015 in adult ALL has been taken off clinical hold. Recall the company announced the FDA placed the trial on hold last week following 2 patient deaths.

McCarthy  wrote, “In our experience, this is one of the most rapid lifts of a clinical hold we have recently seen, and it tells us that the FDA is dialed into the challenges facing CAR-T therapies (and patients) as first movers like Juno and Kite march towards potential approvals in 2017.”

“While three patients risked and subsequently lost their lives in the ROCKET study, they paved the way to save others. Their sacrifice, in our view, was not in vain, as CAR-T therapy is still navigating uncharted waters, and we are still learning how to balance risk (death) and reward (life). The ROCKET study, which has already treated 20 patients, has been modified to better manage clinical risk and will continue its march towards potential approval, as early as next year, when it could save countless more lives. Our thesis and price target remain unchanged,” the analyst continued.

As usual, we recommend taking analyst notes with a grain of salt. They are often successful in moving the stock price, but you always need to take things into perspective. According to TipRanks.com, which measures analysts’ and bloggers’ success rate based on how their calls perform, analyst Jason McCarthy has a yearly average return of -5.7% and a 34% success rate. McCarthy has a -25% average return when recommending JUNO, and is ranked #3761 out of 4055 analysts.

Out of the 12 analysts polled by TipRanks, 8 rate Juno Therapeutics stock a Buy, while 4 rate the stock a Hold. With a return potential of 62.8%, the stock’s consensus target price stands at $52.63. 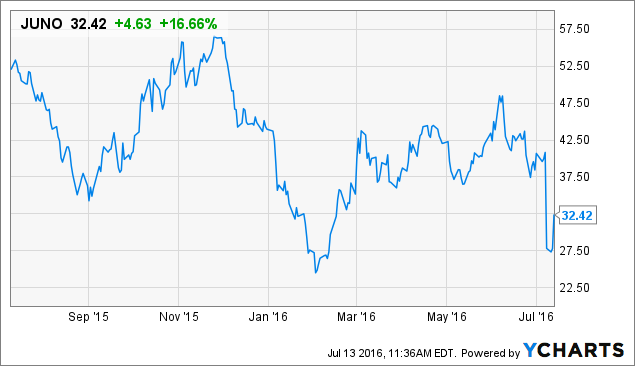