Kolbert noted, "Aeterna announced 4Q results, spending $11M in the quarter and closing the year with $35M in cash, which we add to the $47.2M the company raised (less $5.7M to extinguish outstanding warrants) in 1Q15. With a current net of ~$70M in cash, the company is well positioned to acquire commercial-stage products that fit with its female health focus. We also note that management guided to a reduced burn rate as a result of their restructured R&D effort, prolonging their cash runway."

Furthermore, "AEZS began selling EstroGel, a topical gel for hormone replacement, in December 2014. We expect to see the first launch results in 1Q15. While we believe EstroGel can be a good product we do not see it making a meaningful revenue contribution, instead we believe it helps the company build its commercial focus, setting the stage for additional product acquisitions, which, when combined, can be meaningful, or in other words Estrogel creates strategic value for the company beyond its revenue contribution."

The analyst rates the stock a Buy with a $2.00 price target, which implies an upside of 261% from current levels. 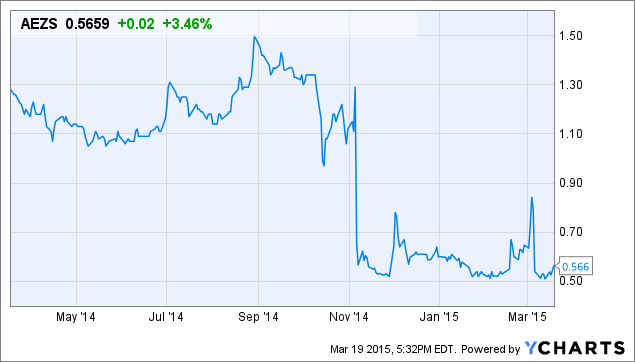