In a research report released Friday, Maxim Group analyst Jason Kolbert reaffirmed a Buy rating on Gilead Sciences (GILD) with a price target of $112. The report follows the recent news that the U.S. Senate Committee on Finance wrote a letter to Gilead President and Chairmen, John Martin to question the cost basis for Sovaldi and linking it with the $900 Gilead is charging for a complete cost of therapy for HCV patients in Egypt.

Kolbert noted, “While we appreciate the intent of the letter, we view it and the prior political attempts to pillary Gilead as folly. The pharmacoeconomic benefits of Sovaldi make it a price competitive regimen in the U.S. HCV landscape. The fact that Gilead has compassion for HCV patients in Egypt should have no bearing on U.S. pricing”.

The analyst added, “If one carefully scrutinizes the total cost of treatment, we find that, at a 12-week course (that’s the label for most patients) of Solvaldi is $103k versus Incivek ($93-$113k) and Vicetrelis ($66-$118). The calculations also do not consider how much more effective Solvaldi is than other regimens. When we calculate the cost of failure rates, the economics on Solvaldi are compelling. We believe the costs of Sovaldi need to be put in the proper perspective—that is, the total cost of treating HCV patients rises only incrementally, and it may actually go down, when the cure rate is considered. As such, we do not pay much attention to the recent “reimbursement” articles, as we believe Solvaldi (and ledipasvir-NS5A) represents a significant advance over SOC today at an incremental cost”.

According to TipRanks.com, which measures analysts and bloggers success rate based on how their calls perform, analyst Jason Kolbert currently has a one-year average return of 9.4% and a 55% success rate. Kolbert has a 26.5% average profit when recommending GILD, and is ranked #469 out of 3212 analysts. 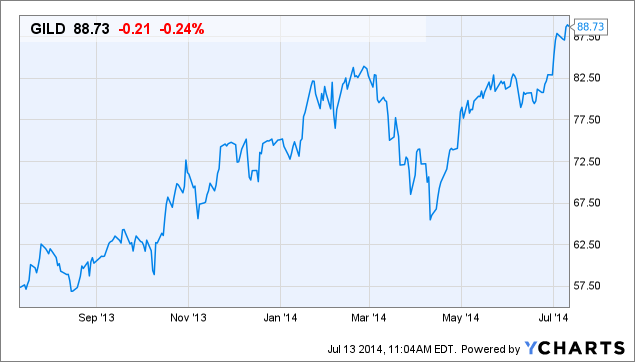