In a research report issued this morning, Maxim Group analyst Jason Kolbert reiterated a Buy rating on Omeros Corporation (NASDAQ:OMER) and slightly raised the price target to $30 (from $28), based entirely on Omidria, the company’s first FDA-approved product, excluding valuation for the pipeline. The new price target represents a potential upside of 39% from where the stock is currently trading.

Kolbert observed, “Omeros is now entering the launch phase of its first product, Omidria (phenylephrine and ketorolac injection 1%/0.3%) in its cataract surgery and ophthalmic lens replacement indications. On January 1, 2015, Omidria’s transitional pass-through status from the Center for Medicare & Medicaid Services (CMS) became effective, allowing doctors to bill Medicare and insurance carriers directly. Our 2015 sales estimate is for $73 million, allowing the company to turn cash-flow-positive in 2H2015.”

The analyst added, “The company raised about $84 million in a public offering at the end of January 2015. We believe the company now has sufficient funds to both launch Omdiria and fund development of its phase II, phase I, and preclinical pipeline. We have projected product revenues to 2024.” 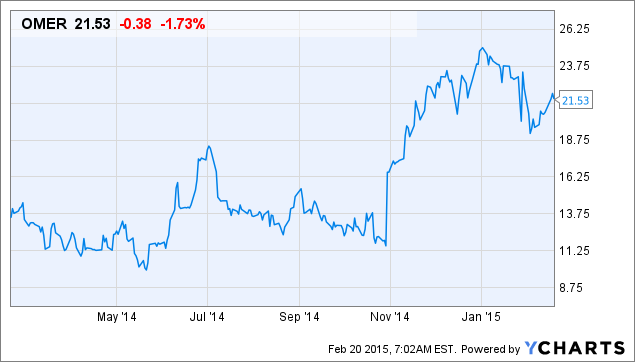