Maxim Group Retains Buy On Pluristem, As Company Being Phase I Trial On Pulmonary Arterial Hypertension

In a research note published yesterday, Maxim Group analyst Jason Kolbert reaffirmed a Buy rating on Pluristem Therapeutics (NASDAQ:PSTI) and an $8 price target, in light of the news that PSTI has begun phase I trial in pulmonary arterial hypertension.

Kolbert wrote, “The phase I study is being conducted in Australia by United Therapeutics as part of a licensing agreement to develop PLX-PAD cells for the treatment of pulmonary arterial hypertension (PAT). The open label study includes 9 patients in 3 cohorts (dosing: 0.5, 1.0 and 2.0M cells per kilogram body weight) in which the first cohort was dosed. Further, an independent Data Safety Monitoring Board has recommended advancement to the second cohort. The primary endopoint is safety at 12 and 52 weeks. Secondary endpoints including changes in exercise ability, disease severity, and cardio-respiratory function (six-minute walk distance, cardio-pumonary hemodynamic parameters) will be measured at 6 weeks post-treatment. We expect preliminary data in early 2015. Pulmonary arterial hypertension is characterized abnormally high blood pressure in the arteries of the lung which leads to an increased workload on the right side of the heart. PAT can lead to heart failure.”

Kolbert added, “With approximately $64M in cash and a modest burn rate (approx. $25M per year), Pluristem has operating capital. Pluristem is currently conducting multiple phase I and II trials across cardiovascular, orthopedic, and pulmonary indications. The company has reported positive phase II data in muscle injury (Germany, 1H2014) and is expecting South Korean FDA approval of a phase II/III CLI study, and US FDA and/or Israeli approval of a phase II study for rotator cuff repair, both by 2H2014.” 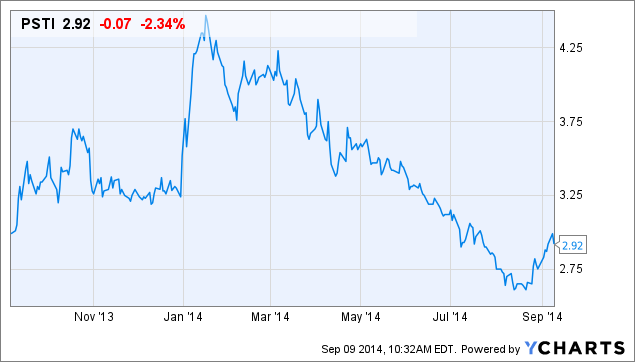