In a research report issued today, Maxim Group analyst Jason Kolbert assigned a Buy rating on Momenta Pharmaceuticals (NASDAQ:MNTA) with a $17 price target, as the company announced top-line results from the dose-escalation component (Part A) of the phase I/II trial evaluating necuparanib in combination with Abraxane (ABX) and gemcitabine (GEM) in patients with advanced metastatic pancreatic cancer.

Kolbert wrote, “The necuparanib starting dose was 0.5 mg/kg, which was increased via a modified 3+3 design until a maximum tolerated dose was determined. ABX was added to the treatment regimen starting with cohort 3 following release of the phase III ABX + GEM data last year. N=37 patients (12 patients in the first two cohorts and 25 patients in the five subsequent cohorts) received necuparanib as of data cutoff and were included in the analyses. Necuparanib does have orphan status. We have not factored this program into our valuation metrics, as it is still in the early phases of development.”

The analyst added, “Our current assumption is that the approval and launch of generic Copaxone will happen by year-end 2014, but it’s just a guess at this point. Movement of other catalysts in biosimilars and novel therapeutics will help MNTA drive revenues beyond Copaxone. Using these metrics, we model the market share in RRMS for generic Copaxone (plus DVT and ACS for generic enoxaparin) and discount back using a high rate of 30% in our free-cash-flow, discounted-EPS, and sum-of-the-parts models to arrive at a $17.00 fair value. These metrics are dependent on our regulatory and commercial assumptions.” 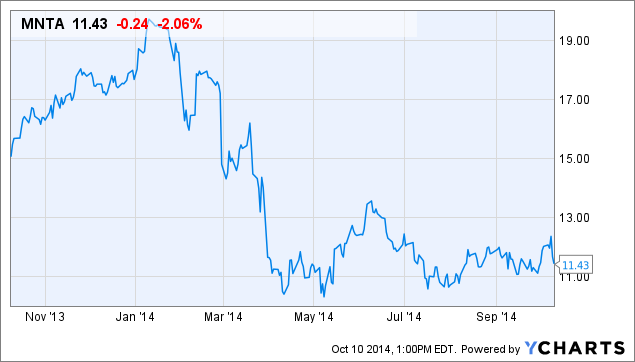