Kolbert wrote, “Advanced Cell Technology announced that The Lancet has published results of two phase I/II trials using its embryonic-stem-cell-derived therapy in Stargardt’s macular degeneration (SMD) and dry age-related macular degeneration (dry AMD). The study met its primary endpoints of safety and tolerability. Secondary endpoints of efficacy included several measures of vision. Most noteworthy was that the patient’s vision improved in 10 eyes, remained the same in seven eyes, and declined in one eye. A multisite phase II study in SMD and dry AMD is expected to begin in 4Q14 and 1H15, respectively. The authors concluded that, “This is the first evidence of medium- to long-term safety, graft survival, and possible biological activity of pluripotent stem cells in individuals with any disease. (These) results suggest that hESC-derived cells could provide a potentially safe new source of cells for the treatment of various unmet medical disorders requiring tissue repair or replacement.” ACTC has been making solid progress on multiple fronts, from corporate restructuring to clinical objectives, evidenced in this publication of data. We consider both the data and overall progress encouraging for the company and maintain that 2015 represents a year of inflection.”

According to TipRanks.com, which measures analysts’ and bloggers’ success rate based on how their calls perform, analyst Jason Kolbert has a total average return of 1.8% and a 41.4% success rate. Kolbert is ranked #1203 out of 3335 analysts. 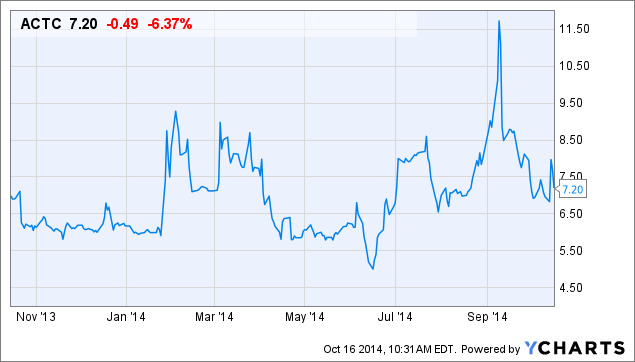