Lululemon: We See No Reason To Step In At This Point, Says Sterne Agee

Poser wrote, “SSS of -5% in brick and mortar (B&M), with ~40% of the stores in the comp base less than 3 years old is nothing to cheer about. Stagnant B&M SSS will continue for the foreseeable future as too many customers have apparently left the fold. Getting customers to return will be challenging at best as deterioration of customer engagement will offset any improvements in product. A PE multiple 22.5X of our FY15 estimates may be a bit rich given real positive change will not occur until 2016, if at all.”

The analyst continued, “We are raising our FY14/15 EPS estimates from $1.72/$1.92 to $1.74/$1.99, reflecting modestly higher revenues and lower share count. We are maintaining our Neutral rating as we do not believe there is upside to estimates or valuation. Trading at ~22.5X our FY15 EPS estimates and over 1X PEG, we believe LULU is expensive. Historic growth rates are just that, as we expect EPS CAGR of ~9% from 2013-2016, below EPS growth rates of over 30% in 2010-2013 time period. We see no reason to step in at this point as SSS will likely remain, at best, in the positive LSD range.” 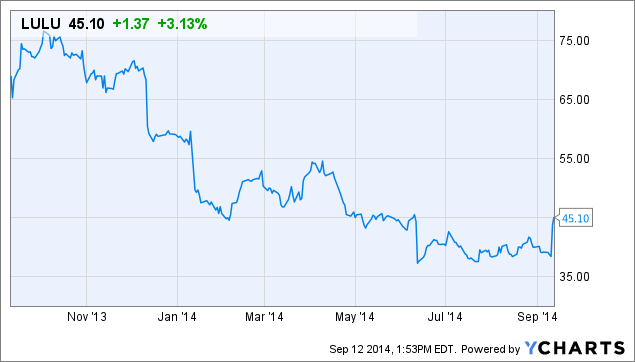