LinkedIn: We Do Not Yet View The Risk/Reward As Compelling, Says William Blair

In a research report released yesterday, William Blair analyst Timothy Mchugh  maintained a Market Perform rating on LinkedIn (LNKD). Overall, the analyst is much more tempted by the stock and he expects a solid set of second-quarter results, but he doesn’t yet view the risk/reward as compelling.

McHugh commented: “We expect LinkedIn to exceed the high end of management’s guidance, but we expect the outperformance percentage to be closer to what we saw last quarter than what we saw in all of the other quarters since the company’s IPO. Based on our estimates, global job postings growth at LinkedIn decelerated slightly in the second quarter, particularly in the United States and some other key international markets (i.e., the United Kingdom), which account for a majority of revenue”.

The analyst continued, “We continue to view LinkedIn as a tremendous company, and the recent pressure on the stock has brought its valuation down quite a bit. The company is trading at a next-12-months’ revenue multiple of 7.4 times, which is down from an average of about 10 times since the IPO and an average of about 11 times over the last year. We believe part of the valuation decline is from investors re-examining the total addressable market for LinkedIn (for both the talent solutions and marketing solutions segments), which we have always viewed as being smaller than many analysts believe. We believe this creates a much more tempting valuation and set of expectations for the company”.

According to TipRanks.com, which measures analysts and bloggers success rate based on how their calls perform, analyst Timothy McHugh currently has a one-year average return of 21.2% and an 89% success rate. McHugh is ranked #787 out of 3211 analysts. 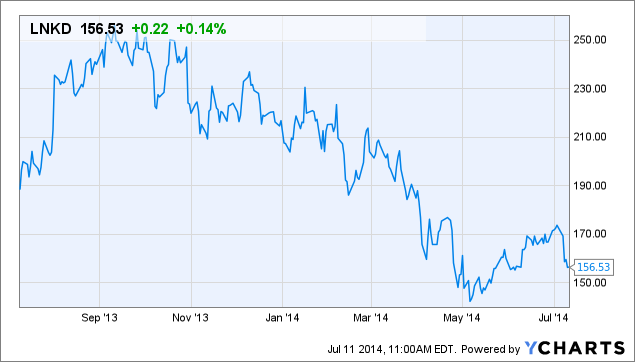