In a research note issued Monday, Roth Capital analyst Joseph Pantginis assigned a Buy rating on Ligand Pharmaceuticals (NASDAQ:LGND) with a price target of $121.50, as the company’s partner Lundbeck received a Complete Response Letter for anti-epileptic drug Carbella. The letter requested additional CMC information, but did not request additional trials.

Pantginis wrote, “Lundbeck is currently addressing the FDA’s requests and it has stated that it is committed to making the drug available in 2015. Recall that the drug previously had a November 2014 PDUFA date. We do not see the delay as having a large impact on LGND, as Carbella is just one potential of many revenue-generating assets for LGND. Delays such as this strengthen our conviction that LGND has a solid business model in its “shots on goal” approach, with many royalty-generating assets and a robust, diversified pipeline. We recently raised our price target and aggressively recommended LGND for this successful business model, as we continue to be impressed with the LGND’s revenue growth while management remains vigilant in managing expenses. One key disconnect, which we believe exists with some investors, is the underlying value of LGND’s very broad clinical pipeline. We believe investors are placing little, if any, value on the clinical stage assets, which are poised to be major revenue contributors over the long term. Recall that last week, the European CHMP issued a positive recommendation for Duavee. In addition, we look towards the anticipated launch of CE-Melphalan in the near term. Regarding Promacta, GlaxoSmithKline (GSK-NC) and now Novartis (NVS-NC) have been throwing significant resources towards developing the drug in oncology indications (above the approved indications for ITP, HepC and SAA). Recall that Promacta was recently approved for SAA under Breakthrough Designation. NVS is expected to file for approval in MDS next year. We also believe that ITP remains a strong driver for Promacta’s future growth and we are encouraged by the drug’s potential in pediatric indications..” 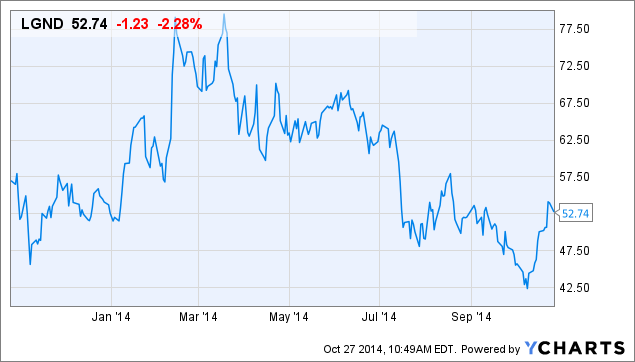