In a research report released today, Roth Capital analyst Joseph Pantginis reiterated a Buy rating on Ligand Pharmaceuticals (LGND) with a $92 price target, following today’s news that LGND’s partner GlaxoSmithKline (GSK) has announced global revenue for Promacta/Revolade for the second quarter of $92 million, up 31% from the second quarter of 2013.

Pantginis noted, “Glaxo (GSK-NC) announced 2Q14 Promacta revenue of $92 million vs. our estimate of $94 million. Additionally, a new short thesis was issued on the stock (though an underlying theme we have been discussing for two years), which we believe is misguide regarding views on Promacta. We believe LGND share weakness is unwarranted based on the quality of current and projected royalty streams and strong projected EPS growth for Ligand”. The analyst added, “We recommend steady accumulation of LGND shares, as we anticipate that current revenue streams from partnered products and the broad “in development” portfolio are poised to drive significant growth in the near and longer term”. 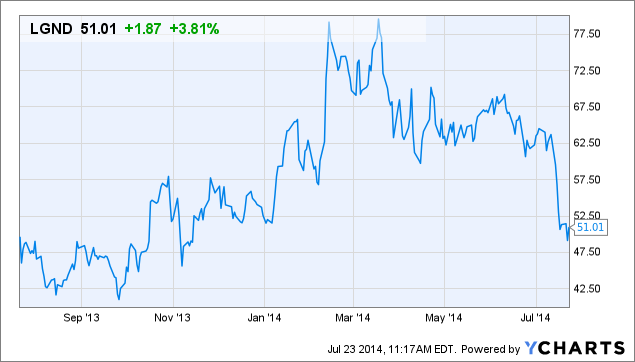