Lexicon Pharmaceuticals, Inc. (NASDAQ:LXRX) shares have taken off, adding more than 60% to trade at $13.55, after the company announced positive results from its Phase 3 trial of telotristat in Carcinoid Syndrome early today.

In reaction, Needham analyst Alan Carr reiterated a Buy rating on LXRX with a $21 price target, which implies an upside of nearly 55% from current levels.

Carr noted, “We believe the stock is attractive given risk reduction around the Carcinoid Syndrome program and our expectation for a positive outcome from the ongoing sotagliflozin Phase 3 trials in Type 1 Diabetes next year.” Furthermore, “Management guided for a pre-NDA meeting with the FDA in the next couple months and plans to submit an NDA in 1Q16. We assume approval in 4Q16. Lexicon has already hired key personnel resp”

The analyst continued, “We estimate peak sales of up to $300M in the U.S. and $150M ex-U.S. As a reminder, most ex-U.S. rights were out-licensed to Ipsen. We believe the next milestone payment due Lexicon from Ipsen is tied to MAA submission. Lexicon ended 1Q15 w/$315M in cash. We believe this is sufficient into 2017.”

Out of the 3 analysts polled by TipRanks, 2 rate Lexicon Pharmaceuticals stock a Buy, while 1 rates the stock a Hold. With a return potential of 41.7%, the stock’s consensus target price stands at $19. 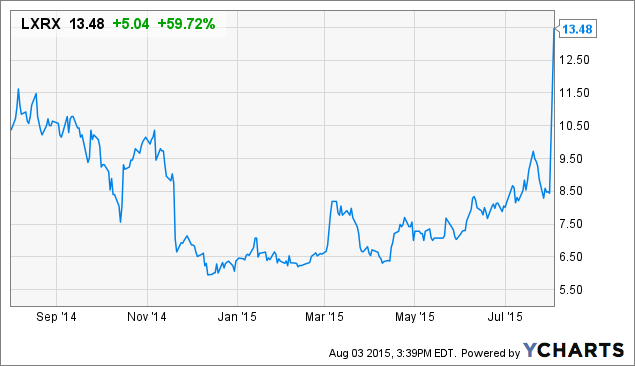