Aschoff wrote, “The conversation covered such areas as what the ferric citrate (FC) label likely means to physicians, FC intellectual property and the potential for NCE, and background on the dialysis market and overall dialysis center work flow. We emphasize that the financial benefit with FC to dialysis centers until at least 2024 is likely to be a strong driver of adoption and that there are various acceptable ways to disseminate the iron and economic benefit to a group of physicians and dialysis center managers that clearly have shown willingness in the past to augment their bottom line. The economic argument would likely resonate particularly strongly with the 20% of dialysis centers that are jointly owned by the head physician(s) there. We note several safety advantages with FC and the absence of any substantial safety issues with the drug, and how that combined with the efficacy give little reason for an ethical dilemma for those adopting the drug primarily for financial reasons. We also counter a few bear theses with evidence we believe to be sufficient. We look forward to the start of the Phase 3 pre-dialysis trial later this month and to product launch in early December.”

The analyst added, “Some key takeaways, in our view, include the fact that monitoring for iron is so frequent already that adding FC to a patient’s regimen does not increase the frequency of any monitoring whatsoever. There are also no new protocols of any kind when using FC. About the only thing FC would do regarding workflow at a center is drastically reduce the administration of IV iron, as well as reduce ESA use, which for some patients is a shot that they receive directly. Keryx would encourage dialysis centers to adopt FC by giving them clear guidelines for ferritin levels and other parameters at which they should administer or terminate the use of IV iron and ESAs when giving FC. The average ferritin level of a dialysis patient is about 800mg and Keryx believes that a level of 500 when on FC might be a wise point at which to terminate IV iron use, but has yet to formally decide what levels to recommend stopping IV iron. We note that there were no cases of iron overload in clinical trials and view this drug label language as cautionary only if also giving IV iron, and the warning also might speak to an FDA view that the favorable economics and safety may drive widespread use. Furthermore, competitors have warnings that directly relate only to their drug. Consider Renvela and PhosLo, which currently have 95% marketshare, with Renvela causing serious cases of dysphagia, bowel obstruction, and perforation, some requiring hospitalization and surgery. For PhosLo, the label says to treat mild hypercalcemia by reducing or interrupting PhosLo and Vitamin D, and severe hypercalcemia may require hemodialysis and discontinuation of PhosLo, and hypercalcemia may aggravate digitalis toxicity.” 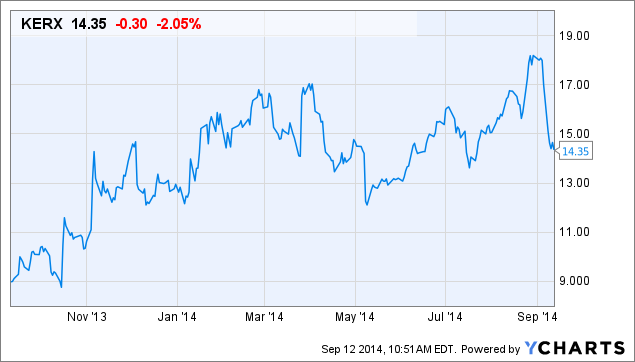