On Wednesday, Keryx Biopharmaceuticals (NASDAQ:KERX) made the announcement that two major insurance providers added Auryxia, a drug used to control serum phosphorous levels in patients with chronic kidney disease (CKD) on dialysis, to their Medicare Part D formularies. This increased Auryxia access to 65% of Americans currently on phosphate binders, from 40% last month. Analysts from Roth Capital and MLV weighed in with similar views on the company’s newest drug statistics. Shares of KERX are currently trading at $9.97, down $0.04, or -0.40%.

Roth Capital analyst Joseph Pantginis shared some insights on Keryx, reiterating a Buy rating on with a price target of $23.00, which represents a potential upside of 129.8% from where the stock is currently trading.

Pantginis noted, “While we think more work still needs to be done, the company now has 10 out of 15 formularies approved, which, in our view, could help Auryxia sales to match our and the Street’s expectations. With additional Part D formulary approvals in hand, KERX now needs to work towards increased adoption rates, which we expect will be supported by the sales force and the sampling program. We believe that until these factors gradually improve, the stock will experience higher than average volatility. We expect reimbursement issues to be resolved during 2H15 at which point it should be accompanied by gradual and consistent sales growth.”

MLV analyst Arlinda Lee offered some commentary on the stock, reiterating a Buy rating on Keryx with a price target of $25.00.

Lee noted, “We view this as a significant development but continue to expect a gradual Auryxia launch as KERX executes on garnering broad reimbursement access, conveying the differentiated Auryxia message, and reaching top target prescribers.” Further, ” We believe KERX is on track to reach its goal of 80% access across Part D and commercial coverage within 12 months of Auryxia approval, and we think reaching 65% covered lives could represent an important inflection point for a successful Auryxia launch.”

According to TipRanks.com, which measures analysts’ and bloggers’ success rate based on how their calls perform, analyst Arlinda Lee has a total average return of 7.0% and a 50.8% success rate. Lee has a -4.4% average return when recommending KERX, and is ranked #1014 out of 3632 analysts.

Out of the 10 analysts polled by TipRanks, 8 rate Keryx Biopharmaceuticals stock a Buy, 1 rates the stock a Hold and 1 recommends Sell. With a return potential of 109.8%, the stock’s consensus target price stands at $21. 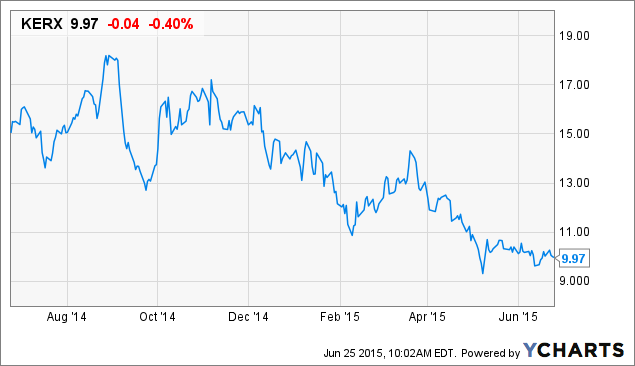