Maxim’s healthcare analyst Jason McCarthy weighed in with some commentary on Juno Therapeutics Inc (NASDAQ:JUNO), after the company announced that FDA has cleared its investigational new drug application for JCAR015 for treatment of adult patients with relapsed/refractory acute lymphoblastic leukemia (r/r ALL).

Mccarthy wrote, “The phase II study (the “ROCKET” study) primary objective is to measure overall remission rate in patients with morphologic evidence of disease. Positive data could mean JCAR015 approval and launch in 2017. Celgene Corporation (NASDAQ:CELG) has the option to be the commercialization partner, as part of the $1B, 10-year collaboration.”

Bottom line, “The news flow from the CAR-T space has been quiet in recent weeks, but we expect it to pick up soon and; therefore, remain postive on the fundamentals of the Juno story. Additionally, an expiring IPO lock-up period, just before the spike in price on the Celgene partnership in June, likely contributed to profit taking and the share price decline. We believe the reduced share price is a buying opportunity.”

The analyst rates JUNO a Buy with a price target of $78.00, which implies an upside of 68% from current levels. 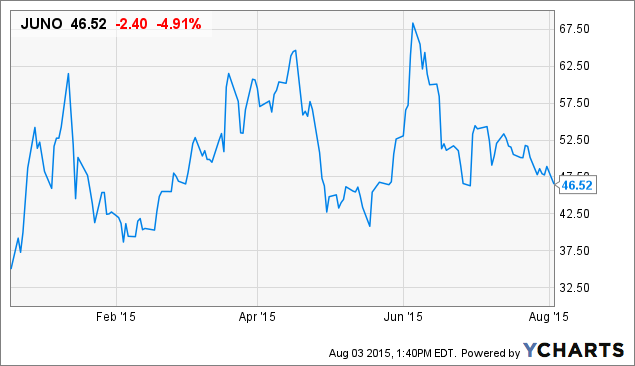