Jefferies analyst Shaunak Deepak weighed in with his opinions on MannKind Corporation (NASDAQ:MNKD), following positive feedback from physicians from the American Diabetes Association on the Diabetes drug Afrezza. The analyst reiterated a Buy rating on the stock with a price target of $9. Shares of MNKD closed yesterday at $7.43, up $0.20, or 2.77%.

Deepak commented, “At the ADA meeting we spoke to 20 U.S. physicians who were familiar with Afrezza and found that while only six had prescribed the drug to date, only one of physicians was fundamentally concerned about prescribing it.” Further, “Of the remaining 13 physicians, we spoke to two pediatric endocrinologists who said they were not going to prescribe the drug until the FDA approved Afrezza for use in children. However, both were positive about the eventual opportunity, with one claiming that he would take Afrezza himself if he were diabetic.”

“We see the physician openness to prescribe Afrezza as a positive that could be realized as MNKD and Sanofi’s increase efforts and discourse with payors and begin direct to consumer advertisement in early 3Q,” the analyst added.

Furthermore, “We expect MNKD to develop a 2-unit cartridge in conjunction with their pediatric development plan for Afrezza. We believe that the availability of the 2-unit cartridge should resolve concerns around dose-titration and further expand the population of patients that physicians would consider treating with Afrezza.”

Out of the 5 analysts polled by TipRanks, 2 rate MannKind stock a Buy, 2 rate the stock a Hold and 1 recommends a Sell. With a return potential of 10.10%, the stock’s 12-month consensus target price stands at $6.50. 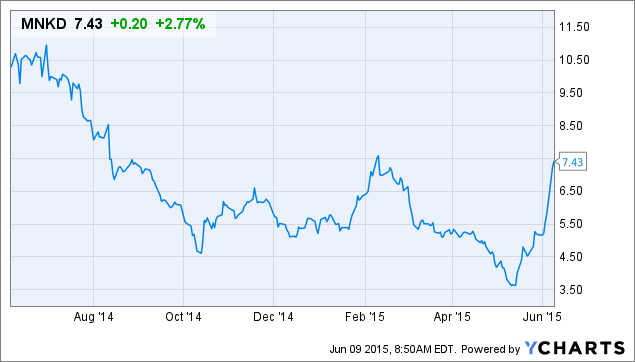