Jefferies analyst Mark Lipacis weighed in with his opinions on Advanced Micro Devices, Inc. (NASDAQ:AMD), following investor meetings with the company’s CEO and VP of IR in New York City. The analyst maintained a Buy rating on the stock with a price target of $4. Shares of AMD are currently trading at $2.33, up $0.04, or 1.53%.

Lipacis observed, “AMD made the case that new product launches in MPUs (Carrizo, and Zen) and Graphics (Fiji) will stabilize its core computing business, while market inflections and investments in the data center and immersive computing position it for longer term growth. at an EV/S of 0.7x (vs 3.0-3.5x for the group), we think the risk reward is attractive.”

Further, “AMD started shipping its semi-custom game console chips to Microsoft and Sony in 2H13, and expects to ship its next two semi-custom products in 2H16 for lifetime revenues of $1 billion. Management didn’t say which end markets or customers they were for, but did note that one was x86+graphics and one was ARM +graphics. the company said that it could support 3-to-6 semi-custom projects at one-time.”

Out of the 14 analysts polled by TipRanks, 4 rate AMD stock a Buy, 7 rate the stock a Hold, and 3 recommend Sell. With a return potential of 27.47%, the stock’s consensus target price stands at $2.97. 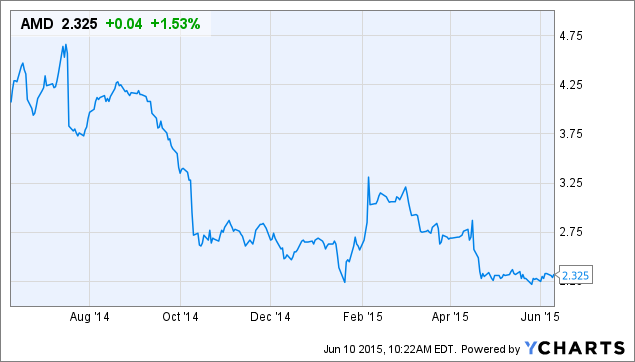