In a research report issued today, William Blair analyst Dmitry Netis reiterated an Outperform rating on JDS Uniphase (JDSU), following the company’s fiscal fourth-quarter results. JDSU posted a nice upside this quarter on revenue, beating Netis and consensus expectations (by over $10 million) and the high end of its guidance; EPS beat expectations by a penny.

Netis commented: “Our revenue estimates now assume growth of 4.5% in fiscal 2015 (versus prior 6%) and we introduce a 2016 growth estimate of 5.5%. EPS are lowered to $0.68 from $0.76 for fiscal 2015 and we introduce a 2016 EPS estimate of $0.79. Operating margins still embed a healthy expansion from 8.7% in fiscal 2014 to 10% in 2015 and 11% in 2016. With bar reset lower, the stock feels washed out to us and downside seems somewhat limited given a rock-bottom valuation and NSE likely reaching bottom. By no means are JDSU’s three main businesses in secular decline, in our view, which likely puts an upward pressure on the multiples. Following a 5% decline in the aftermarket, the shares are trading at 14 times our new calendar 2015 EPS of $0.81 versus peers at 18 times and the historical forward P/E multiple of 16 times. Given solid bookings, improving gross margins, steady performance in optical and commercial lasers, and the likelihood of operating margin expansion into double digits, we believe the risk/reward equation remains favorable.” 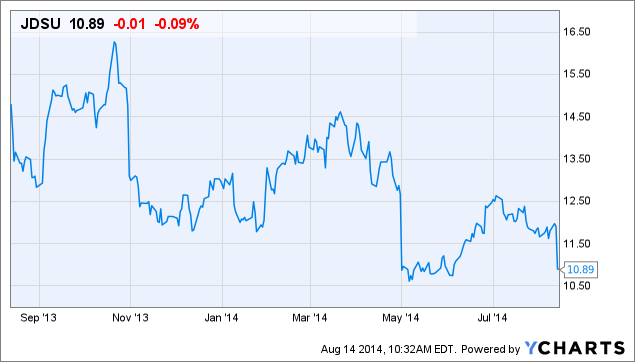