Lee noted, “In 3Q, we anticipate initiation of a confirmatory study. Patients on drug will be compared to historical control but it remains unclear what historical data will be used. Importantly, it remains undisclosed how long patients will be followed as prior studies examined patients between 24 weeks and up to 168 weeks. Lastly, the study design does not seem to address the FDA’s questions around the quantification methodology for dystrophin”. Lee continued, “The FDA had expressed “significant concerns regarding the company’s ability to draw valid conclusions based on the Study 201/202 data with respect to walking performance and other data. Importantly, the Agency had issues with the methods in assessing dystrophin and remains skeptical about the dystrophin data. SRPT  still plans to file an NDA for eteplirsen by year-end”.

In conclusion, “Our take on eteplirsen’s regulatory pathway remains unchanged. We continue to believe that the FDA remains uncomfortable with dystrophin as a surrogate endpoint of efficacy for approval given the questions the Agency has around the methodology in assessing dystrophin. We note that to date, there has been no precedence set with the FDA in utilizing surrogate endpoints for approval in DMD”.

According to TipRanks.com, which measures analysts and bloggers success rate based on how their calls perform, analyst Kimberly Lee currently has a one-year average return of 11.9% and an 50% success rate. Lee is ranked #1021 out of 3211 analysts. 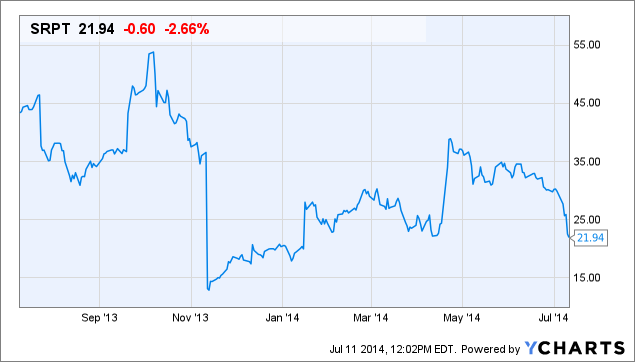