In a research report issued today, Janney Capital analyst Kimberly Lee reiterated a Sell rating on Sarepta Therapeutics (SRPT) with a $13 fair value, following today’s news of the termination of Art Krieg, Chief Scientific Officer who had been at the company for 7 months. He was responsible for the expansion of the product pipeline and was not a part of the FDA interactions for the eteplirsen program

Lee noted, “Although the company could not provide additional clarity around the reasons for his termination, the CEO did say that the company is currently seeking a replacement who will be a good fit to lead the pipeline expansion beyond eteplirsen”. She continued, “In 3Q, we anticipate initiation of a confirmatory study. Patients on drug will be compared to historical control, although it remains unclear what historical data will be used. Importantly, it remains undisclosed what the followup time will be for patients as prior studies examined patients between 24 weeks and up to 168 weeks. In addition, we anticipate additional clarity on the feasibility of a 4 th biopsy in these patients. In 4Q, we expect presentation of final 144-week eteplirsen data at World Muscle Society (Oct 7-11; Berlin) followed by an NDA submission for eteplirsen by year-end. Lastly, we anticipate 168-week data in 1H15. Announcements regarding expansion of the platform technology into areas outside of neuromuscular diseases may be announced but likely after a new CSO is appointed”.

According to TipRanks.com, which measures analysts and bloggers success rate based on how their calls perform, analyst Kimberly Lee currently has a one-year average return of 6.5% and an 48% success rate. Lee has a 5.2% average return when recommending SRPT, and is ranked #1259 out of 3222 analysts. 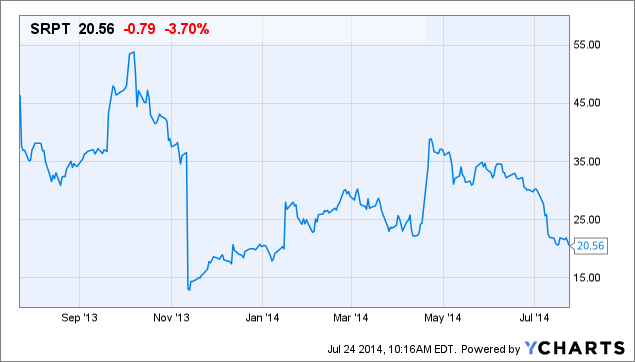