Lee wrote, “As of July 2nd, the company had approximately $98.4 million in cash and equivalents, which should sustain operations into 2016, per our estimates. The company reiterated its 2014 cash burn of $54-$59 million, which remains in line with our estimates.” Lee continued, “We recently upgraded FOLD based on our increased confidence in a potentially favorable Study 012 outcome (see note FOLD: Upgrading to Buy; $5 FV; Additional Study 012 Details Revealed). With one positive Phase III study complete, we await data readout from the 50-patient, non-inferiority switch Study 012 in 3Q, which should serve as an inflection point for the stock. Primary endpoints are renal function assessed by iohexol GFR with secondary endpoints of renal function assessed by estimated GFR and 24-hour urine protein, general clinical outcomes, cardiac function and patient reported outcomes such a pain and quality of life. Given that 18- to 24-month data from Study 011 demonstrated stabilization of kidney function in Fabry patients on migalastat, we are encouraged that Study 012 data should be positive.”

According to TipRanks.com, which measures analysts’ and bloggers’ success rate based on how their calls perform, analyst Kimberly Lee has a total average return of 4.3% and a 51.9% success rate. Lee has a 3.7% average return when recommending FOLD, and is ranked #1272 out of 3214 analysts. 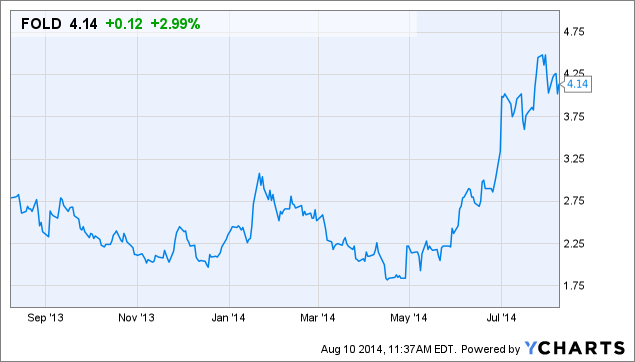