In a research report issued yesterday, Janney Capital Markets analyst Kimberly Lee reiterated a Buy rating on Vertex Pharmaceuticals Inc. (VRTX) and gave it a Fair Value Estimate of $110. The report follows 2Q14 earnings, where it reported revenues of $113M and an EPS of $(0.61) which came in below consensus of $116M and $(0.56).

Lee noted, “We project that triple combination therapy will likely be pathway to treat the heterozygous population but await Phase II data in early 2015 to make a final determination. We reiterate our BUY rating and $110 fair value estimate, which is based on a DCF analysis of cash flows through 2021”. Furthermore the analysts said, “VRTX announced that VX-809 plus Kalydeco missed the primary endpoint of mean absolute change in FEV1 in a Phase II study in patients with heterozygous F5809del (-0.62% vs. -1.23% for placebo; p=0.1287). The mean absolute treatment difference was 0.61% (p=0.5978). We had expected this outcome given the challenges in this patient population”. 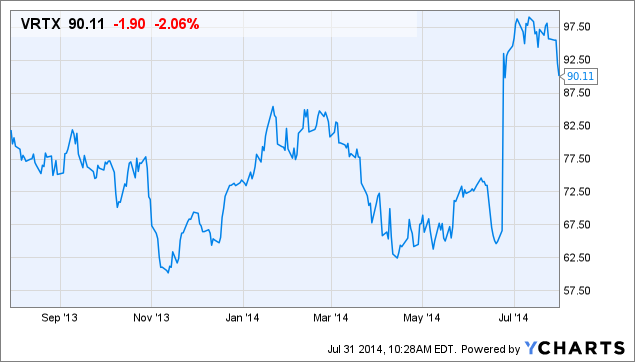