In a research report pubished yesterday, Janney Capital analyst Kimberly Lee maintained a Buy rating on Medivation (NASDAQ:MDVN) with a $110 fair value, following the announcement that Xtandi has received label expansion. This comes as new data shows that the label differentiates Xtandi from JNJ’s Zytiga which should drive increased usage amongst urologists.

Lee wrote, “Label expansion came approximately a week earlier than the established September 18 PDUFA date. Importantly, new data were released in the revised label that demonstrated prolongation of time to initiation of cytotoxic chemotherapy after Xtandi treatment to a median of 28.0 months in drug-treated patients compared to a median of 10.8 months for patients on placebo (HR=0.35; CI: 0.30, 0.40; p<0.0001). In addition, the median time to first skeletal-related event was 31.1 months for drug-treated patients compared to 31.3 months for patients on placebo (HR=0.72; CI: 0.61, 0.84; p<0.0001). We believe that the new data in combination with previously reported pivotal data offer Xtandi a clinically differentiated profile from JNJ’s Zytiga that should translate into prescribing preference by urologists.” Lee added, “Our rating is based on Xtandi’s blockbuster potential, strong global collaboration and compelling valuation.”

According to TipRanks.com, which measures analysts’ and bloggers’ success rate based on how their calls perform, analyst Kimberly Lee has a total average return of 12.6% and a 66.7% success rate. Lee has a 32% average return when recommending MDVN, and is ranked #534 out of 3295 analysts. 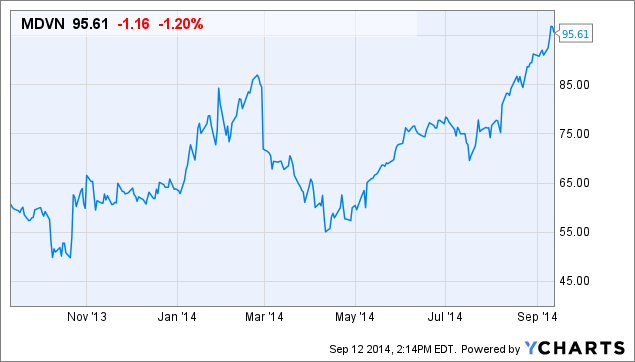