J.P. Morgan’s healthcare analyst Cory Kasimov weighed in today with a few insights on ZIOPHARM Oncology Inc. (NASDAQ:ZIOP), after the company announced a new collaboration with Intrexon under which the companies will work to develop therapies for the treatment of Graft versus Host Disease. The analyst rates the stock a Neutral, without suggesting a price target.

Kasimov noted, “The idea behind both approaches is that local delivery of IL-2 should activate Tregs without amplifying killer T cell response, idea being the operative word as both approaches are largely in the idea phase at the moment. On the call, XON/ZIOP noted they intend to begin research/preclinical studies later this year, and provide an update later next year. Based on this commentary, we suspect an IND is unlikely before 2017 at the earliest, and thus this development has no impact on our current thesis. Under the terms of the agreement, ZIOP will pay XON a $10M technology access fee, and will reimburse XON for all R&D costs, with any potential operating profits split equally between the companies.

According to TipRanks.com, which measures analysts’ and bloggers’ success rate based on how their calls perform, analyst Cory Kasimov has a total average return of -7.3% and a 28.8% success rate. Kasimov is ranked #3619 out of 3752 analysts.

Out of the 4 analysts polled by TipRanks, 3 rate Ziopharm Oncology Inc stock a Hold, while 1 rates the stock a Buy. With a return potential of 48.0%, the stock’s consensus target price stands at $13.67. 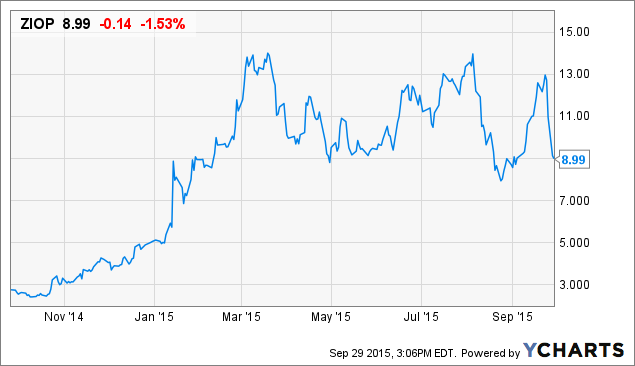