J.P. Morgan’s healthcare analyst Cory Kasimov came out with his views on Ariad Pharmaceuticals, Inc. (NASDAQ:ARIA), after the company released its first-quarter financial results and provided a corporate update. The analyst reiterated a Neutral rating on the stock, with an $8.00 price target, which implies a potential downside of 10% from current levels.

Kasimov observed, “The company largely reviewed timelines for trial starts in 2015 and updated commercial metrics. Getting the three new Iclusig trials up and running this year remains the most important step, in our view, with data from the dosing trial (which we don’t expect until late next year) key to answer Q’s around dosing/efficacy. Given the current ~50% penetration of the on-label market (which is expected to be relatively stable in 2015), we believe label expansion/growing the addressable market for Iclusig is critical, and the planned studies in earlier lines of therapy plus the dose-ranging trial could potentially provide more clarity/confidence in the drug’s ultimate market opportunity.

Out of the 10 analysts polled by TipRanks, 5 rate Ariad stock a Buy, 3 rate the stock a Hold and 2 recommend a Sell. With a return potential of 2.01%, the stock’s 12-month consensus target price stands at $9.13. 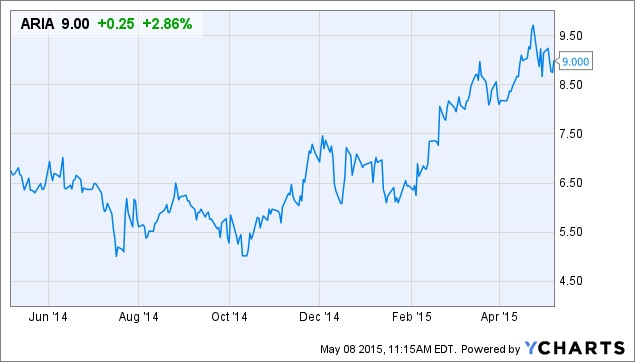