In a research report issued today, J.P. Morgan analyst Cory Kasimov reiterated an Overweight rating on Novavax, Inc. (NASDAQ:NVAX) with a $10 price target, following the company’s second-quarter financial results and update on its pipeline. The company ended the quarter with $168 million in cash and no debt. Given this cash position and with BARDA funding NVAX’s influenza programs, the company has sufficient cash to fund programs into 2016, according to the analyst.

Kasimov noted, “The co largely reviewed the encouraging progress made with the initiation of five clinical trials. We believe 2015 is set up to be an important year for NVAX with data readouts expected from all 6 programs. We remain impressed by the potential of the company’s proprietary recombinant nanoparticle vaccine technology and believe the platform has been validated by clinical data from several programs (RSV and H5N1/H7N9 flu). NVAX is the leader in developing a vaccine to protect against infection from respiratory syncytial virus (RSV), the leading cause of acute respiratory infections in infants/children. Based on safety and immunogenicity data to date, we see a high probability of success for the RSV program and believe clinical data ~mid-2015 could drive further upside.” 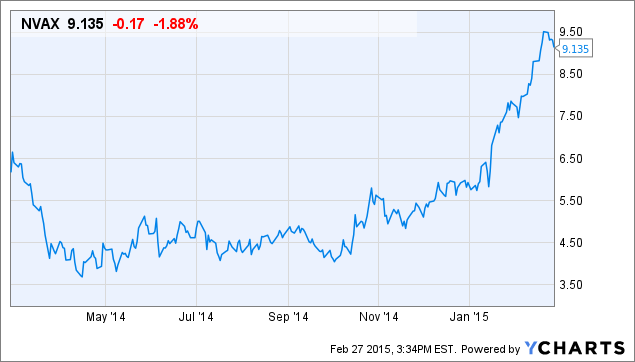