J.P. Morgan’s healthcare analyst Cory Kasimov weighed in today with a few insights on Keryx Biopharmaceuticals (NASDAQ:KERX), after the company released its fourth-quarter financial results and provided a corporate update. The analyst rates the stock an Overweight with a $24 price target, which implies an upside of 103% from current levels.

Kasimov stated, “The company provided a lot of color on the reimbursement/commercial front, noting everything is proceeding as planned and early feedback from key stakeholders has been positive. While management expects continued wk/wk growth in scripts early on, they expect more meaningful growth to start in 2H15 with greater access on a reimbursement front. This is in line with our thinking that 2015 could be a tale of two halves (slow launch in 1H/better traction and data in 2H).”

Furthermore, “While early Rx numbers have been a recent point of focus/weakness, we do not think that there were expectations that Auryxia would fly off the shelves day 1 given the complicated dynamics in the dialysis market, and our 2015 rev estimate of $48M is unchanged. Bottom line, we’re anxious to see how Auryxia’s pharmacoeconomic benefits resonate in the real world and drive use in the highly price sensitive dialysis market.” 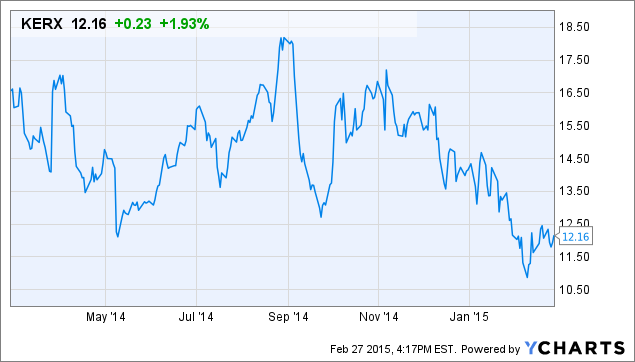