J.P. Morgan analyst Cory Kasimov weighed in today with a favorable report on Incyte Corporation  (NASDAQ:INCY), raising the price target to $118 (from $111), while maintaining an Overweight rating on the stock. The increased price target comes after the biopharmaceutical company released its second-quarter earning release, posting GAAP EPS of $0.05 compared to Kasimov’s estimate of $0.15. US Jakafi sales grew 69% to $142 million, beating Kasimov estimate of $137 million, prompting INCY to bump 2015 sales guidance.

Kasimov wrote, “INCY noted that Jakafi has currently only penetrated ~1/3 of the addressable MF+PV market, so there remains a lot of room for growth. Details provided on PV launch progress (slides here) indicate that everything is headed in the right direction, with the strong early uptake (and potential for longer duration use) boding well for peak revenues. The pipeline is also moving along on schedule, with a lot of news flow expected in 2H15 and into next year.”

Bottom line, “Our thesis is unchanged, INCY’s execution – both commercially and clinically – continues to be very solid. Its increasing commercial footprint and multiple mid- to late-stage blockbuster candidates differentiate INCY from many of its peers and offer compelling potential (and scarcity value), in our view.”

Out of the 9 analysts polled by TipRanks, 8 rate Incyte stock a Buy, while 1 rates the stock a Hold. With a downside potential of 13.3%, the stock’s consensus target price stands at $96.38. 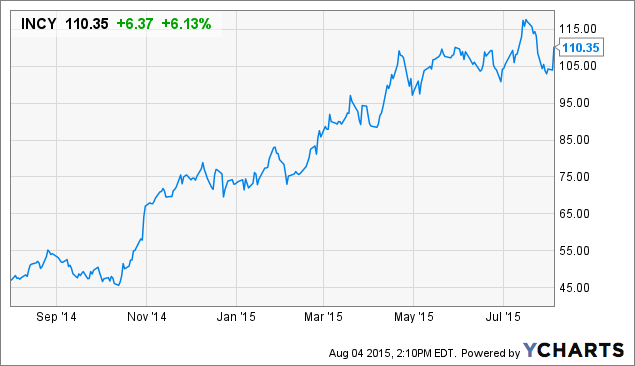