J.P. Morgan’s healthcare analyst Cory Kasimov weighed in today with a few insights on Incyte Corporation (NASDAQ:INCY), after hosting a call with INCY’s CEO Herve Hoppenot, as part of J.P. Morgan’s 2015 Spring Biotech Conference Call Series. The discussion was largely focused on the discovery engine, growing pipeline, and the commercial outlook for Jakafi.

Kasimov wrote, “In management’s opinion, the thing that makes INCY special is its research team of medicinal chemists and biologists. There is an intense focus on internal discovery and the company is only looking for innovation. It’s not in the “me too” business, if it’s not the first in class, then has to be the best.” Furthermore, “Profitability is something that is discussed, but the goal isn’t just to be profitable, it’s to be “very profitable.” So INCY won’t make decisions just to get to the point of profitability but rather will continue to make investments for the best return longer term”

“On Jakafi for heme, after 3 or 4 months of commercialization, the PV launch thus far is proceeding in line with expectations. There were some known hurdles going in (launching in an indication where nothing else has been approved, lower urgency to treat, getting patients into the office, etc), but seeing traction and early feedback is positive (more details to come on the 2Q call).”, the analyst added.

The analyst rates the stock an Overweight with a price target of $111, which represents a slight upside potential from current levels. 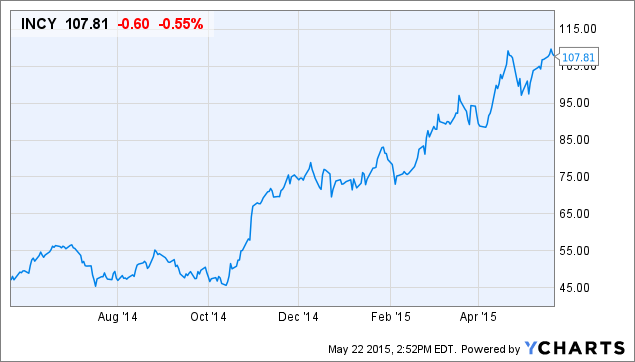