The investment banking firm J.P. Morgan lowered its price target on ACADIA Pharmaceuticals Inc. (NASDAQ:ACAD) to $40 (from $43), while maintaining an Overweight rating on the stock. The decreased price target comes following the company’s announcement of a delay in the NDA filing for pimavanserin in PDP.

The lead analyst Cory Kasimov noted, “We acknowledge that at this stage it is difficult to have confidence in ACAD’s ability to build out a commercial organization given what we have seen on the manufacturing/regulatory front. Positive top-line Phase 3 data was first announced in November 2012, and we can’t recall a situation where a co has taken this long/had this many delays in filing an NDA. During ACAD’s conference call and our follow up with mgmt, interim CEO Steve Davis stressed that this was strictly the company’s fault and not at all an issue with the drug (very straightforward to make).” However, “we are maintaining our OW rating because we still believe in the long term potential and scarcity value of this asset.” 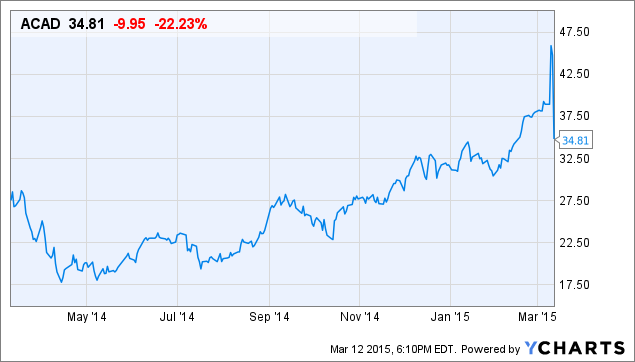