In a research report published Monday, JP Morgan analyst Cory Kasimov maintained an Overweight rating on Vertex Pharmaceuticals (NASDAQ:VRTX) with a price target of $130, following  a meeting with the company’s management, ahead of the 2015 J.P. Morgan Healthcare conference, which kicks off this morning.

Kasimov wrote, “The co sounded a positive tone ahead of what we expect to be an eventful 2015 with a focus on the broad development plan for the ‘661/Kalydeco combo and further growth potential of Kalydeco. VRTX also provided 2015 Kalydeco net revenue guidance of $560-580M (JPMe $636M, cons $675M). Although Kalydeco estimates are below consensus, we note this guidance incorporates a headwind from Kalydeco pt enrollment in the ‘661 studies, which we believe is not incorporated in Street estimates.”

The analyst concluded, “With a largely de-risked and dominant CF franchise, several pending value-creating catalysts, a cash cushion of ~$1.4B, and an estimated turn to profitability in late 2015 (with significant leverage thereafter), we see the potential for additional meaningful upside in VRTX.” 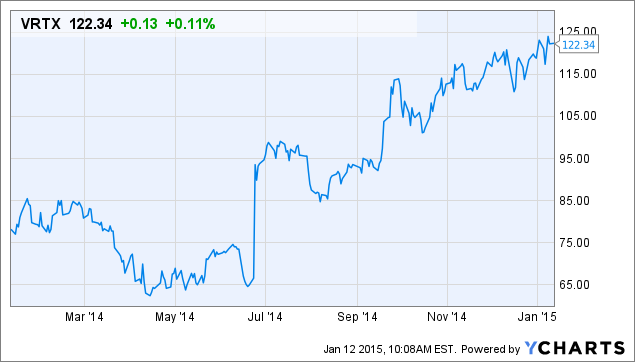