Is It Time For Bottom Fishing In Apple Inc.? BMO’s Keith Bachman Weighs In

Continuing worries about a China hard landing and a related selloff in commodities are sending Apple Inc. (NASDAQ:AAPL) shares into a tailspin. In reaction, BMO Capital analyst Keith Bachman weighed in today with a research report entitle ‘Trying to Find a Bottom’. Given the meaningful sell-off in AAPL shares over the past month, the analyst was looking to assess AAPL’s valuation relative to previous trough multiple.

Bachman wrote, “We believe the stock is inexpensive at current levels. We forecast by product line, not by geography. With that said, we wanted to attempt to put some context around China risk in FY2016. China was 23% of Apple’s revenues in the LTM through June 2015 and growing as a percentage of revenues. For FY2016, we project total revenue growth of 3.2% y/y. If we assume that China revenues grow by 10% y/y in FY2016 (likely conservative, but very tough compares), then the implied growth rate for all other geographies would be about 1% y/y in FY2016. If we assume that China has zero growth, this would suggest a loss of $5.8 billion in revenue and about $0.25 in EPS, all else equal, or about 2.5% lower EPS.”

“If we assume that 1) our current estimates for AAPL are reasonable, and 2) AAPL reaches trough multiples for NTM P/E, relative P/E and FCF, then the average of our noted trough multiples would suggest a value of about $99. Hence, we believe that investors are already assuming that AAPL estimates move lower over the next few quarters,” the analyst continued.

Bachman reiterated an Outperform rating on Apple stock, with a price target of $145, which represents a potential upside of 38% from where the stock is currently trading. 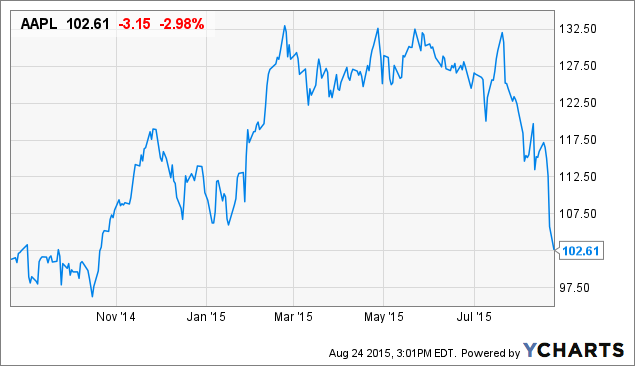