Wedbush analyst Liana Moussatos weighed in with her views on Intercept Pharmaceuticals Inc (NASDAQ:ICPT), after the company released its second-quarter results, posting $0.445 million in licensing revenue, compared to consensus of $0.65 million. Q2 GAAP EPS of $(1.99) was in-line with consensus.

Moussatos noted, “Incorporating guidance for increased OpEx in H2 and timing for initial meaningful OCA sales slightly reduced our estimates in 2015 and later. The company ended Q2 with about $732MM in cash & cash eq., which we project can cover the launch of OCA in PBC, and depending on potential OCA sales in 2016 on, runway could also cover Phase 3 development of OCA in NASH, and initiation of clinical development of INT-767.”

The analyst continued, “NDA and MAA submissions for OCA in PBC are likely to be accepted for review in H2 (by August 28th in the US). Since the FDA could provide confirmation of a Q1:16 advisory committee meeting and PDUFA date, we anticipate this announcement could provide a catalyst for the stock. With anticipated accelerated approval, we project (functional) launch in H1 2016 and project WW peak sales could reach $2.26BN in 2022.”

Additionally, the analyst reiterated an Outperform rating on ICPT, with a fair value estimate of $493, which represents a potential upside of 108% from where the stock is currently trading. 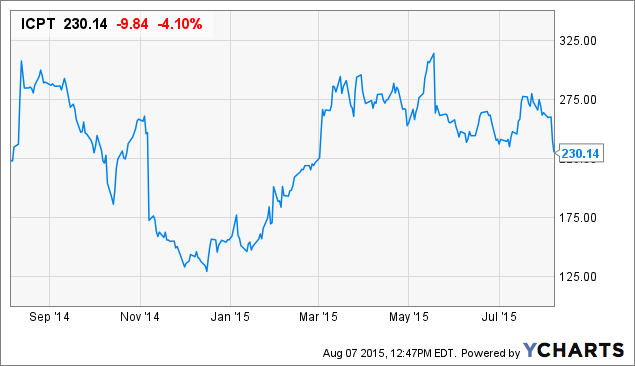