Inovio Pharmaceuticals Inc (NASDAQ:INO) rose over 20% in Wednesday’s trading session, after the drug maker said its HIV vaccine Pennvax-GP achieved some of the highest overall rates of immune response ever demonstrated in a human study for such treatments. Pennvax-GP demonstrated 100% immune response rates in healthy subjects (N=94), including both T cell and B cell (antibody) responses.

Dr. J. Joseph Kim, Inovio’s President & CEO, said, “These results are among the highest ever responses we’ve seen with an HIV vaccine, and they are remarkably consistent with our recent data reported from our Ebola, Zika and MERS clinical trials in terms of demonstrating nearly 100% vaccine response rates with very favorable safety profile. Furthermore, our newer and more tolerable intradermal vaccine delivery device showed that we can elicit very high immune responses at a much lower dose. We look forward to advancing PENNVAX-GP into later-stage clinical development with our partners and collaborators.”

In reaction, Maxim analyst Jason McCarthy raised his price target for INO to $12.00 (from $10.00), while reiterating a Buy rating on the stock. The new target implies an upside of 38% from current levels.

McCarthy commented, “The immune responses demonstrated by PENNVAX-GP are among the highest responses shown for an HIV vaccine. With this data, Inovio now has a more clear path forward in the HIV space and the stage is set for a larger clinical program. In addition, we are focused on the VGX-3100 program and the start of the P3 program in cervical dysplasia, which we expect in mid-2017.”

Out of the 6 analysts polled in the past 12 months, 5 rate Inovio Pharmaceuticals stock a Buy, while 1 rates the stock a Hold. With a return potential of 42.1%, the stock’s consensus target price stands at $12.33. 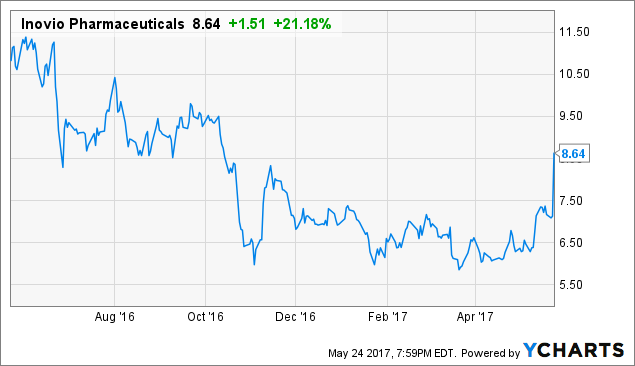