Doardla commented: “Although the muted full-year guidance was reaffirmed, it appears the company’s pipeline is strong and theimpact of top-level executives leaving the company does not appear to be materiallyaffecting business. The company won five large deals during the quarter with a total contract value of $700 million, and given that 99% of revenue was generated from existing customers, we are incrementally positive on the company’s ability to maintain business as usual after the loss of 10 senior executives in the past year”.

The analyst continued, “The story following the first-quarter results, we believe management’s muted full-year revenue guidance will negatively affect investor sentiment and limit upside to the stock in the near term. Although we believe management is being relatively conservative given the improving discretionary spending environment and positive traction on the large deal front, we recommend investors remain on the sidelines until the company can prove it is capable of delivering organic growth at or above industry levels (13% to 15%, according to Nasscom”.

According to TipRanks.com, which measures analysts and bloggers success rate based on how their calls perform, analyst Anil Doradla currently has a one-year average return of 2.9% and a 57% success rate. Doradla is ranked #1772 out of 3213 analysts. 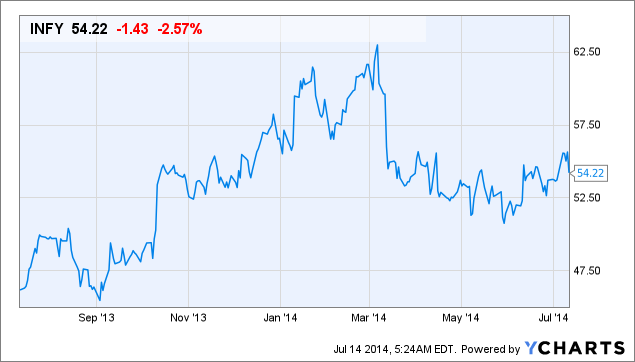